Congratulations to Paul Johnson Drywall customers D.R. Horton, Pulte Homes and Standard Pacific / CalAtlantic Group for all making the Top 5 on Builder Magazine's List of The Top 100 Home Builders in 2016!!

Where Is All Of The Labor? 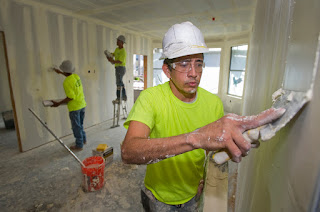 Learn the truth behind the labor shortage and why it's not what most expect.

I am frequently asked, why, given that single-family home permits and starts are still lagging the current recovery, are we facing such a significant labor shortage?

Understanding this, all you have to do is look to the Construction Pipeline for Phoenix and Tucson reported by ABI Multifamily. Within these reports, simply compare the 2015 units delivered with the 2016 estimated unit delivery to understand the significant demands on our labor pool in Arizona. According to the report, Phoenix alone is showing an anticipated 11,000 units will be delivered in 2016 vs. 4,661 in 2015, an increase that more than doubles the demand on labor. Likewise, in Tucson the anticipated number of units delivered in 2016 is 1,000, which also is more than double the 445 units that were delivered in 2015.

The staggering growth in multi-family alone has placed higher than usual demands on the local labor pool. In addition, because of the growth, multi-family has attracted general contractors and subcontractors who have not been focused in the market previously. This broadening of firms into new markets is pulling labor from other areas and causing stress in commercial construction as well.

We’re not the only ones to recognize that the growth is significant.  In the March 25, 2016 issue of the Phoenix Business Journal, bankers spoke of their transition away from financing multi-family projects. In the article, “Banks see Some Tarnish in Multi-Family’s Shimmer,” Ed Zito, president of Alliance Bank of Arizona, said his institution has moved past multifamily and said “multifamily is too competitive.” Also, David Ralston, chairman and CEO of Bank of Arizona said, “We’ve avoided lending on multi-family projects.”

As usual, the market is going to correct itself. However, due to substantial demands by the multi-family sector, the construction industry will continue to face significant labor challenges through 2016.

Posted by Paul Johnson Drywall at 12:45 PM No comments: 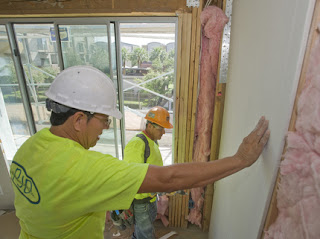 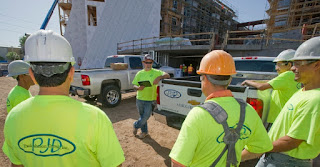 Since January 1st Paul Johnson Drywall has been highly-focused on ensuring that our best customers can count on us to deliver on our deadlines. We began implementing major initiatives that have already allowed us to successfully recruit 112 new workers and approximately 100 workers were re-hired as permanent full-time crew members. Our growing crews are serving clients in Arizona and Nevada where some market segments are returning to pre-recession activity levels.

You may be wondering how we are doing this in such a tight labor market. Well, it’s pretty basic; we are offering every employee excellent wages and benefits, including paying the highest wages in its markets and providing all full-time employees with paid vacation, healthcare for them and their families, and bonuses for performance at the end-of-the-year. The firm’s new and returning employees include primarily experienced craftsmen who will serve as crew leaders and members. Adding the new employees has increased the firm’s permanent full time-crews in Phoenix by more than 20 percent.

“As you know, we continue to face significant labor shortages nationally and more specifically across the southwest, particularly in recent months as construction activity has been increasing. As a result, Paul Johnson Drywall is aggressively recruiting crews by offering the highest wages in the market and providing benefits that were previously unknown to crews in the drywall industry,” said Cole Johnson, President of Paul Johnson Drywall.

While these initial results are positive for our firm and ultimately provides our best customers with the confidence in knowing their deadlines will be met, the worker shortage will continue to impact the construction industry. That is why Paul Johnson Drywall is elevating its appeal to the current market workforce and working to attract brand new workers to a career in construction. In addition to these pay increases and new benefits Paul Johnson Drywall is engaged in apprentice training programs and is taking action to further build upon our seasonal worker program.

“Our crews told us what they want, and we are delivering it. We are taking actions that will help us recruit and retain employees while also expanding our labor pool to ensure we increase capacity and are able to respond to the needs of our best customers,” said Johnson.

We are focused on this, and we are willing to do what it takes to do right by our customers and our employees.
Posted by Paul Johnson Drywall at 1:32 PM No comments:

Department of Labor’s Future of Work Symposium in Washington, D.C. 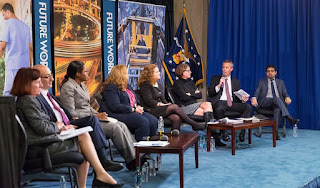 
With the holidays upon us and December drawing to a close, it's common to reflect on the past year and plan for the year ahead. During 2015, many of us were blessed to enjoy our market's recovery, and for this we are thankful! As the recovery continues into 2016, we can anticipate the new, healthy challenges that labor shortages and material cost increases will pose to the construction and drywall industry.

At Paul Johnson Drywall (PJD), we're proactively taking steps to foster an environment where our workforce is well-cared for and productive, which is also attracting more workers. In fact, this topic was the theme of the Department of Labor’s (DOL) Future of Work Symposium, which I was invited to participate in earlier this month, in Washington, D.C. The symposium brought together the public and private sectors to discuss the evolving workplace and share best practices.

PJD constantly strives to be a better employer, an effort which we feel ultimately makes us a better drywall contractor. During my time in Washington, I was asked to share what PJD has been doing to advance our labor standards and how those actions have affected the company, and I want to share it with you as well.

The primary actions taken include PJD shifting to a W-2, or a direct employment, model. Because of this shift, PJD is paying industry-best wages to our crews and has allowed us to also provide health care to each of our employees and their families. As a result, PJD now has nearly 1,000 employees who are loyal to our firm, and committed to delivering for our customers.

While we remain aware of the growing labor shortage, I am proud to say that PJD is able to meet our customer’s needs as a result of our industry-best employment practices. Our loyal crews position us very well for the year to come, and we are proud to be able to produce for our customers, irrespective of industry shortages.

As I prepare to celebrate the holidays with my family, I would like to thank Paul Johnson Drywall’s loyal employees and customers for all of their support during the past year. I look forward to prospering through 2016, together.

Paul Johnson Drywall
Established in 1967 on the principles of integrity, quality and service, Paul Johnson Drywall (PJD) is one of the largest and most respected specialty contractors in the Southwest. Having earned a reputation for quality workmanship and reliability on drywall projects over the years, PJD brings the same peace of mind on a wide-range of construction services to customers with more robust needs. Our commitment to quality, safety and integrity comes through on every project, large or small. For the same reason that the most recognizable homebuilders and general contractors in Arizona regularly call upon our crews, new customers can rely on PJD for new construction, remodels and tenant improvement projects. To speak to a PJD representative or to receive a quote, contact us at: Mail@PaulJohnsonDrywall.com.